All the Fab Fours Instruments from Stage to Studio 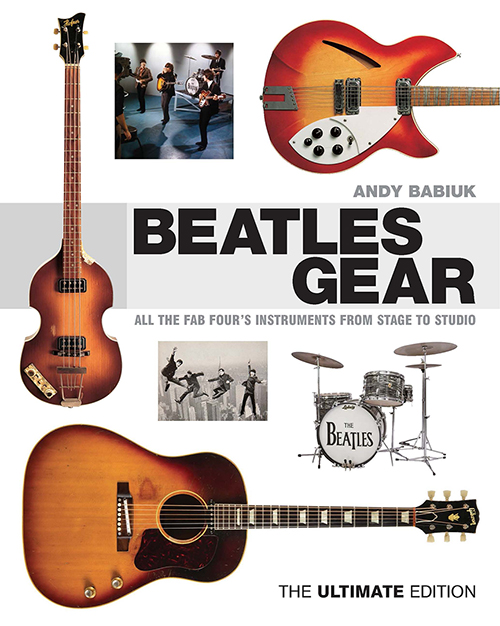 This ultimate guide to all the gear used by the Beatles details exactly which guitars, drums, amplifiers, and keyboards the Fab Four embraced throughout their brief but revolutionary career, from their earliest days as the Quarry Men to the dissolution of the Beatles in 1970. It provides fascinatingly fresh insights into Beatle history, exploding myths and uncovering dozens of new stories along the way. John, Paul, George, and Ringo's moves from cheap early instruments to the pick of 1960s technology are carefully and entertainingly documented in an easy-to-read narrative, fully illustrated with many previously unseen photographs, a cache of rare memorabilia, and a unique collection of specially photographed instruments used by the Beatles.

As we continue to find new ways to explore their sound, from vivid remasters of their original recordings to cutting-edge video games, the Beatles remain at the forefront of popular music. This landmark book is perfect for the fan absorbed by music rather than hairstyles, for the tribute-band member with an eye for detail, and for any reader with an abiding interest in the 1960s. With a foreword by acclaimed Beatle author Mark Lewisohn, Beatles Gear tells it like it was.

Endorsements
“Gear heads, rejoice: Beatles instrument expert Babiuk returns with an expanded edition of his acclaimed reference book. In addition to the original material, the author has added over 650 new photos and more stories behind the group's iconic guitars, drums, pianos, amps, and more.” – Something Else! Reviews

Reviews
“After its release at the turn of the century, Andy Babiuk's Beatles Gear became a bible to Beatles fans wanting to get the scoop about the gear the band used on stage and in the studio throughout their career. Beatles Gear: The Ultimate Edition, the updated version of the book – twice the size of the original – was released in November of this year. The book guides the reader through the gear the band used throughout its career. With a foreword by author Mark Lewisohn (who penned the essential The Complete Beatles Recording Sessions: The Official Story of the Abbey Road Years 1962-1970), the book is a fantastic read, Beatles fan or not.” – ProSoundNews
“The original Beatles Gear book was published back in 2001 and, over the past decade-and-a-half, it's become the go-to bible for anyone with an interest in the extensive equipment the Fab Four dabbled with during their incredible albeit brief career. The new expanded Ultimate Edition, which has recently hit the shops, provides fascinating new interviews, 650 new and previously unpublished photos and a slew of surprising recent gear-related discoveries that author Andy Babiuk has helped uncover.” – musicradar.com
“With huge photos and great gear shots, the engagingly written Beatles Gear Ultimate Edition is equally likely to appeal to Beatles fans, gear hounds, engineers, and those interested in world history and how it shapes pop culture. Beatles Gear is massive, with thick paper stock, glossy pages, and a sturdy cover. It's obvious that a tremendous amount of research went into this, and it couldn't have been done without contributions and input from people within the Beatles' organization. Informative and entertaining, and with a impressive amount of photos of rare instruments (including shots of the actual instruments used by the band, many of which have never been published before), it's a visual delight as well. Whether you read it cover to cover, browse through the various chapters randomly, or use it as a research tool, it's bound to entertain, elucidate, and delight. It really is the definitive volume on all the gear used by four young chaps from the UK who happened to change the world forever.” – harmonycentral.com
“For devoted fans, gear collectors, and anyone else with a hankering for Fab Four gear knowledge, it doesn't get much better than this.” – Guitar Aficionado
“For anyone who loves the Beatles' music and appreciates the enormous influence the band had on the guitars and amps we use today, let along the music itself, this is an essential purchase.” – Guitar Interactive
“This new edition includes numerous new interviews, more than 500 new photos, (this section is simply sensational you can spend hours on it) and it also adds new instruments to the list and never before seen photos. [...]The best thing is that this is not a product for instrument freaks, any fan can enjoy this book.” – This Is Rock