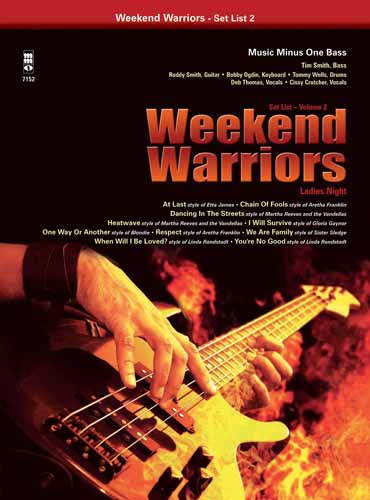 One only has to watch any episode of American Idol to figure out that every female vocalist on the show believes they are the next Beyonce, Pink, Mariah, Lady Gaga, or Rihana. Years ago it was Aretha, Barbara Streisand, Linda Ronstadt, or Mariah Carey - long ago it was Ella, Patsy Cline, Jo Stafford...ok - see the point?

A band with a great female singer is a winner. The guys in the audience come to believe that she is singing directly to them, and no one else. The gals in the audience believe they have a sister on stage that can articulate all the things that are happening in their ladies only club. In choosing songs for Weekend Warriors, Vol. 2 we decided to pick some of the legendary songs and singers. With Etta James signature ballad, At Last, we picked a song that really started the transition from jazz to rhythm and blues. With Aretha and Martha Reeves, we have a complete dose of hard core soul music. Linda Ronstadt gives us two great examples of the California free spirit in music. Sister Sledge and Gloria Gaynor introduce us to disco and Blondie gives us our first helping of a mixture of punk rock and metal. Obviously, this is the mere tip of the iceberg, but what a first round! Every song is a smash hit, every song is performed frequently around the globe, and every song is an education on the right way to write, sing, and perform.

This is NOT a karaoke project. We record karaoke or background tracks for this company every week. We spend a huge amount of time to try to faithfully recreate every part of a record. It is not unusual to have 6 tracks of guitars, 6 passes of keyboards, multiple percussion passes, as well as 10-20 tracks of background vocals. What does that mean to you? It means that if you go to a weekend gig with a 5 piece band, that you are going to have to condense those things and find a way to perform the signature grooves, lines, riffs, and rhythm tracks. That is what the Weekend Warriors series will do for you. We are true to the original tempo, key, and parts. In songs where there are multiple guitar or keyboard parts, we will demonstrate how to pick out the most important parts to be true to the song. Each book is customized for the individual instrument with instruction on determining those parts. You will find the signature parts of each song notated along with helpful hints on everything from sounds to style. Each song will also have a complete chord chart with measure numbers so that we can help you find where the licks happen in context.

For most of us, the true joy of music is sharing it. While there are millions of musicians "jamming" in their basements with headphones and an audience of the family pet, the true experience is walking into a venue and playing songs that put people on the dance floor or at least to put a lot of smiles on their faces as they sing along. This series is a wonderful tool to help facilitate that, whether you are a teenager wanting to figure out how to make some gas money on weekends, to a working band that wants to actually capture the essence of the original hits, Weekend Warriors Set List is for you. Whether you use this as an educational tool, a play along product, or a rehearsal partner is up to you. But by all means dig in, don't let another opportunity to step on stage and make music pass you by, Here are 10 songs guaranteed to hit the mark - have fun! - Tim Smith