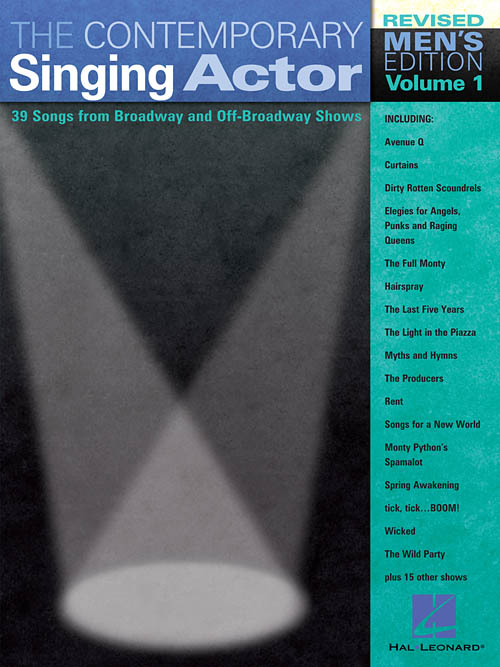 This expansive series takes an in-depth look into contemporary theatre repertoire for singers, spanning the 1980s, '90s and into the 21st century. Some songs in these collections have never before appeared in print. Approximately 35-40 songs per volume represent the most interesting choices for singers from a wide variety of Broadway, Off-Broadway and London shows. Every auditioning singer will find plenty of intriguing possibilities!

Alive! (from JEKYLL & HYDE)
Dust And Ashes (from NATASHA, PIERRE & THE GREAT COMET OF 1812)
Fantasies Come True (from the Broadway Musical AVENUE Q)
Fortune Favors The Brave (from AIDA)
Great Big Stuff (from DIRTY ROTTEN SCOUNDRELS)
Haben Sie Gehort Das Deutsche Band? (Have You Ever Heard The German Band?) (from THE PRODUCERS)
Hard To Be The Bard (from SOMETHING ROTTEN!)
Her Voice (from THE LITTLE MERMAID - A BROADWAY MUSICAL)
I Don't Understand The Poor (from A GENTLEMAN'S GUIDE TO LOVE & MURDER)
I'm Not Wearing Underwear Today (from the Broadway Musical AVENUE Q)
If I Can't Love Her (from BEAUTY AND THE BEAST: THE BROADWAY MUSICAL)
If I Didn't Believe In You (from THE LAST FIVE YEARS)
Il Mondo Era Vuoto (from THE LIGHT IN THE PIAZZA)
It Took Me A While (from JOHN & JEN)
King Of The World (from SONGS FOR A NEW WORLD)
Left Behind (from SPRING AWAKENING)
Love To Me (from THE LIGHT IN THE PIAZZA)
Man (from THE FULL MONTY)
Me (from BEAUTY AND THE BEAST: THE BROADWAY MUSICAL)
Memphis Lives In Me (from MEMPHIS)
The Nicest Kids In Town (from HAIRSPRAY)
The Old Red Hills Of Home (from PARADE)
Run Away With Me
Santa Fe (from NEWSIES THE MUSICAL)
Shiksa Goddess (from THE LAST FIVE YEARS)
Shouldn't I Be Less In Love With You? (from I LOVE YOU, YOU'RE PERFECT, NOW CHANGE)
Sibella (from A GENTLEMAN'S GUIDE TO LOVE & MURDER)
Sir Robin's Song (featured in MONTY PYTHON'S SPAMALOT)
Still (from ANASTASIA)
30/90 (from TICK, TICK...BOOM!)
What Is It About Her? (from THE WILD PARTY)
What Would You Do? (from IF/THEN)
What You'd Call A Dream (from the Off-Broadway Revue DIAMONDS)
When Words Fail (from SHREK THE MUSICAL)
Why God Why? (from MISS SAIGON)
Words Fail (from DEAR EVAN HANSEN)
You Should Be Loved (from SIDE SHOW)
You'll Be Back (from HAMILTON)
Your Eyes (from RENT)