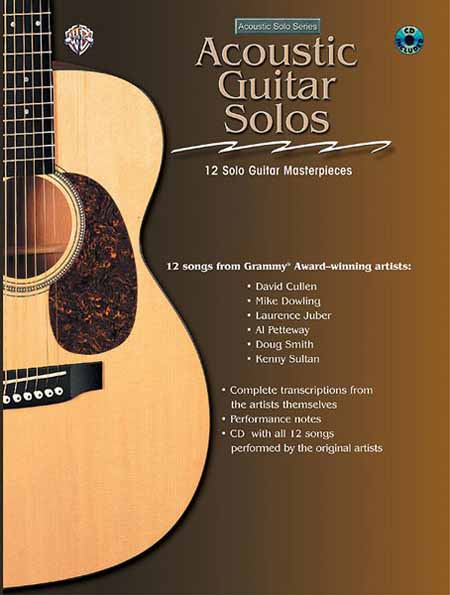 Guitar arrangements transcribed by the artists themselves, in standard notation and tab. Each edition of the Acoustic Masterclass Series includes a CD in which the artist walks you through the key aspects and techniques for each arrangement Arrangements and recordings by David Cullen, Mike Dowling, Laurence Juber, Al Petteway, Doug Smith, and Kenny Sultan.

David Cullen: has recorded nine CDs for leading acoustic guitar label Solid Air Records. He is featured on the Winham Hill Guitar Sampler and other Windham Hill compilation CDs, and his recordings have been featured on NPR statiolll throughout the country. David is a featured performer in the Windham Hill Winter Solstice Concerts, and he performed with Will Ackerman, Michael Manring, and the Jaco Pastorius Big Band.

Mike Dowling: Influenced by traditional Piedmont-style finger pickers like Mississippi like the late John Hurt and swing jazz legends like the late George Barnes, Mike has developed a style uniquely his own. Early in his career, Mike toured and recorded witl mandolinist Jethro Burns, jazz violin great Joe Venuti, and master fiddler Vassar Clements. Clements calls him simply: "One of the finest guitar players there is, anywhere." In 1995, after years of playing with various ensembles, Mike launched a solo career. With the release of his first solo album, the critically acclaimed Swamp Dog Blues, he headlining at concerts and festivals throughout the world and has been a frequent guest on public radio's "A Prairie Home Companion". Mike maintains a busy performance schedule and teaches at a variety of music camps and workshops throughout the country, including his own Greater Yellowstone Music Camp for acoustic blues and swing.

Laurence Juber: grew up in North London, where he was inspired by the explosive British pop scene of the early 60s. Laurence became a highly in-demand studio player, contributing to many recordings ranging from the Alan Parsous Project and Rosemary Clooney to playing lead guitar on the Academy Award-nominated soundtrack to The Spy Who Loved Me. In 1978 Paul McCartney asked Laurence to become the lead guitarist for his band Wings. After McCartney folded Wings in 1981, Laurence moved to the U.S, where he concentrated on raising a family while resuming his studio career. He played on such classic '80s TV shows as "Happy Days" and "Family Ties:' In 1990 Laurence released his first solo; album, Solo Flight, which first showcased his fingerstyle guitar work. His next CD, Naked Guitar, solidified his reputation; among guitar fans, and he began touring internationally as a solo concert performer. His solo fingertsyle CDs include; Winter Guitar, Mosaic, Altered Reality, Different Times, Guitarist, and the best-selling LJ Plays the Beatles.

Al Petteway: has had an illustrious career as a guitarist, composer, and producer. He has been featured on more than 60 nationally released recordings, including 14 of his own. His original compositions have been used in movie soundtracks and for programs on NPR and PBS, including Ken Burns' film Mark Twain. His trademark musical style, mixing Celtic and American themes, has won him more than 50 Music Association awards, including the Indie award for Gratitude, a duo guitar project with his wife and musical partner, Amy White. Al is the coordinator for the world-renowned; Swannanoa Gathering's Guitar Week and is Artist -in- Residence at Warren Wilson College near Asheville, North Carolina..When they aren't touring as a duo, he and Amy work together, recording music and photographing nature at their home high in the mountains of western North Carolina.

Doug Smith original instrumental compositions combine folk, classical, jazz, and contemporary forms with virtuoso guitar technique to create a unique, flowing, and highly melodic fingerpicking style. His music has been heard on radio and TV stations throughout the world, including CNN, ESPN, E!, The Discovery Channel, and Encore; his playing has been heard on the soundtracks to movies such as Twister and Moll Flanders; and he has performed on the nationally syndicated radio programs "Echoes," "West Coast Live;' and "River City Folk" as well as local radio and TV shows around the country.

Kenny Sultan is one of the most highly respected blues guitarists, and blues guitar educators, in America. Kenny graduated with honors from the University of California at Santa Barbara, where he majored in music/ethnomuusicology. A noted teacher, he has taught music, guitar, and music history at the university level and has conducted countless workshops and seminars. In addition to numerous recordings as a sideman, Kenny has two widely acclaimed solo guitar CDs with Solid Air Records.