Vocal Selections From The Broadway Musical 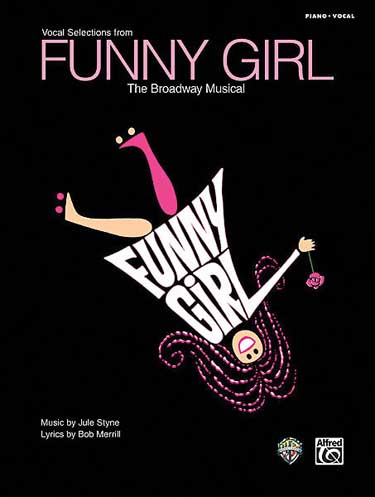 Transcrições para voz / piano; incluindo: I'm the Greatest Star • Cornet Man • His Love Makes Me Beautiful • I Want to Be Seen with You Tonight • Henry Street • People • You Are Woman, I Am Man • Don't Rain on My Parade • Sadie, Sadie • Who Are You Now? • The Music That Makes Me Dance • Funny Girl.

Funny Girl is Broadway's classic rags-to-riches love story about legendary entertainer Fanny Brice during Ziegfeld's Golden Era of burlesque. Its beloved score by Jule Styne and Bob Merrill is filled with unforgettable songs like “Don't Rain on My Parade,” “I'm the Greatest Star,” “The Music That Makes Me Dance,” and the iconic hit “People.” Barbra Streisand first immortalized these songs in the original 1964 Broadway smash, and yet again in the famous movie adaptation several years later. The show continues to enjoy immense popularity today with a major Broadway revival and countless productions worldwide. Pianists and singers will delight in this updated piano/vocal selections folio, in which the arrangements of several songs have been upgraded to better reflect the familiar original cast recordings compared to earlier printed editions. Also added is the song “Funny Girl,” which Styne and Merrill wrote for the 1968 movie adaptation.

Cornet Man
Don't Rain On My Parade
Funny Girl
Henry Street (Styne/Merrill)
His Love Makes Me Beautiful
I Want To Be Seen With You Tonight
I'm The Greatest Star
The Music That Makes Me Dance
People
Sadie, Sadie
Who Are You Now?
You Are Woman, I Am Man