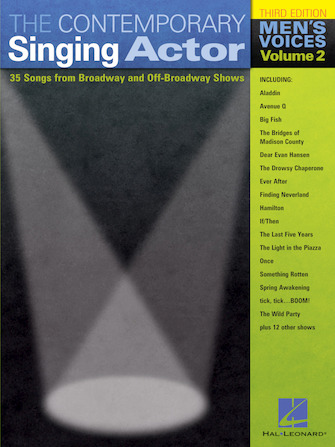 This expansive series takes an in-depth look into contemporary theatre repertoire for singers, spanning the 1980s, '90s and into the 21st century. Some songs in these collections have never before appeared in print. Approximately 35-40 songs per volume represent the most interesting choices for singers from a wide variety of Broadway, Off-Broadway and London shows. Every auditioning singer will find plenty of intriguing possibilities!

All That's Known (from SPRING AWAKENING)
The Devil You Know (from SIDE SHOW)
Fight The Dragons (from BIG FISH)
For Forever (from DEAR EVAN HANSEN)
Gaston (from BEAUTY AND THE BEAST)
Hero And Leander (from MYTHS AND HYMNS)
I Am Aldolpho (from THE DROWSY CHAPERONE)
I Can't Stand Still (from the Broadway Musical FOOTLOOSE)
I'll Be Here (from THE WILD PARTY)
If The World Turned Upside Down (from FINDING NEVERLAND)
If You Were Gay (from the Broadway Musical AVENUE Q)
It All Fades Away (from THE BRIDGES OF MADISON COUNTY)
It's Hard To Speak My Heart (from PARADE)
Let Me Drown (from THE WILD PARTY)
Lost In The Wilderness (from CHILDREN OF EDEN)
Moving Too Fast (from THE LAST FIVE YEARS)
One Song Glory (from RENT)
Passeggiata (from THE LIGHT IN THE PIAZZA)
Proud Of Your Boy (from ALADDIN)
Real Life (from TICK, TICK...BOOM!)
Right Before My Eyes (from EVER AFTER)
Say It To Me Now (from the Motion Picture ONCE)
She Cries (from SONGS FOR A NEW WORLD)
The Streets Of Dublin (from A MAN OF NO IMPORTANCE)
Sunday (from TICK, TICK...BOOM!)
To Thine Own Self (Reprise) (from SOMETHING ROTTEN!)
Waving Through A Window (from DEAR EVAN HANSEN)
What Do I Need With Love (from THOROUGHLY MODERN MILLIE)
What Do You Do With A B.A. In English (from the Broadway Musical AVENUE Q)
What You Own (from RENT)
Why (from TICK, TICK...BOOM!)
Wonderful (from the Broadway Musical WICKED)
You Don't Need To Love Me (from IF/THEN)
You Won't Succeed On Broadway (from MONTY PYTHON'S SPAMALOT)
You'll Be Back (from HAMILTON)