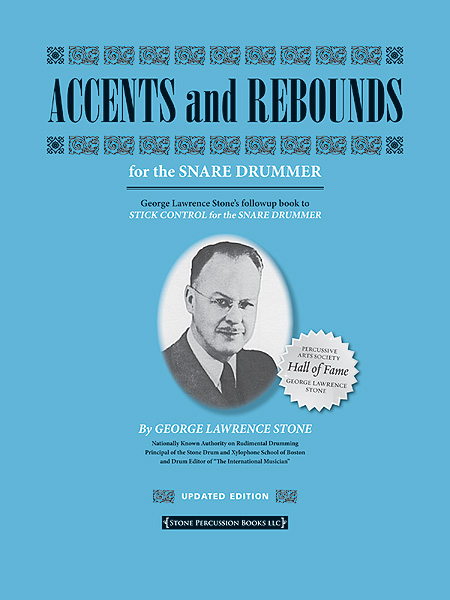 ACCENTS AND REBOUNDS is an advanced textbook, designed to follow and reinforce the author's previous book STICK CONTROL, so widely known and used.

It is presented at the solicitation of (1) the many leading instructors who, having used the former book with such gratifying results, ask for material to follow and (2) the many "name" drummers who consider their daily workout with STICK CONTROL a must and who like­wise suggest more of the same.

Accents in varying degrees play an important part in music. Modern music calls more and more for an infinite variety of emphasis. The drums from their very nature possess a poten­tial for accentuation far greater than any other musical instrument. Hence the drummer is looked to above all others for the utmost in dynamics.

The accent routines have been carefully selected from the author's private collection of hand­conditioners and will, with faithful practice, further two-handed dexterity and develop not only the control out the finesse to meet today's most exacting requirements.

ACCENTS AND REBOUNDS also presents, for the first time, a progressive approach to control of the secondary beat of the roll, so important in the finished execution of this, the drummer's long tone. The routines here are the result of years of study in roll production, and have been employed by the author in his private teaching most successfully.

The routines in which accents and rebounds are combined are particularly adaptable to the development of FINGER BOUNCE EXECUTION, a style so effective in modern soloing, in which at speedy tempos sticks are manipulated mainly by finger action.

A special chapter is included on THE BUZZ ROLL in which its relationship to the pure two­beat roll is spelled out and its use in modem drumming justified. Boston, Massachusetts GEORGE LAWRENCE STONE