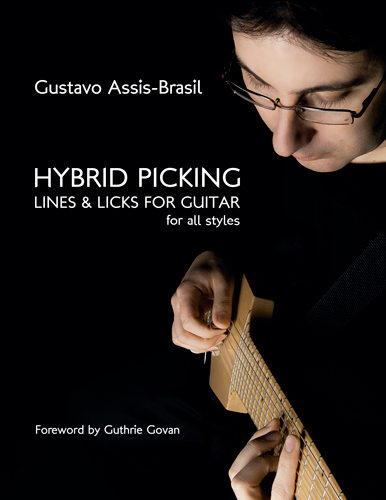 “Gustavo’s book is probably the most comprehensive study of hybrid picking I’ve seen. I highly recommend it to anyone interested in this technique.”
BRETT GARSED, virtuoso guitarist

“Hybrid picking is the most expressive form of electric guitar playing there is. Gustavo’s book takes the mystery out of it and lays out a complete and simple method to gain control of the right hand fingers and the pick simultaneously. I highly recommend it!”
CARL VERHEYEN, virtuoso guitarist

“I think this is the ultimate book for jazz guitarists learning to utilize hybrid picking. Gustavo has included everything anyone would need to master the technique.”
STEVE TROVATO, guitar educator

“With Hybrid Picking For Guitar, Gustavo Assis-Brasil has created a hugely valuable resource, in terms of expanding both one’s technique and vocabulary. Also, the studies at the end of the book are beautiful pieces in their own right. I highly recommend it.”
BEN MONDER, jazz guitarist

Welcome to a very splendid new book on hybrid picking! Essentially this is the "Swiss army knife" approach to picking technique, combining the advantages of fingerstyle and "regular" picking to facilitate all sorts of crazy stuff (wide interval leaps, open chord voicings, polyphony, you name it...) which would otherwise be unplayable. Hybrid Picking Lines & Licks For Guitar offers an abundance of new ideas for your delectation... Perhaps the coolest thing about the examples in here is that they're not just technical exercises: the actual notes are interesting, too, so your fretting hand and musical ear are just as likely to benefit as your hybrid picking technique itself. I'm confident that any guitar player, regardless of his/her style and technique, will find something challenging and inspiring in the following pages. Nice one, Gustavo!
GUTHRIE GOVAN

"Since working out of Gustavo Assis-Brasil's Hybrid Picking books I've definitely been graced with new and creative approaches to the guitar. I've always been a fan of wide intervallic lines, as well as voice leading, and hybrid picking seems to be the perfect technique encompassing both those things and more. I've literally been inspired to write new music directly after spending a little time with his books daily. Getting the Lines & Licks book pushed things even further as far as creative lines are concerned. Having use of my other fingers while still holding the pick is an ingenious way to approach the guitar!”
TOSIN ABASI (Animals as Leaders)

"Gustavo Assis Brasil's new book is an excellent resource for any guitarist looking to expand their melodic vocabulary with hybrid picking technique. Guitarists seeking to expand their palette will find a great deal of inspiring material throughout."
TIM MILLER

“Gustavo Assis-Brasil has authored a valuable resource for the serious guitarist looking to improve his or her abilities using hybrid picking. Gustavo clearly lays out many exercises to build and develop this crucial skill. Highly recommended.”
JOHN STOWELL

“Gustavo Assis-Brasil's Lines & Licks book is really useful for those interested in the hybrid picking technique and also a great tool for anyone interested in broadening the knowledge of the fingerboard.”
NELSON VERAS