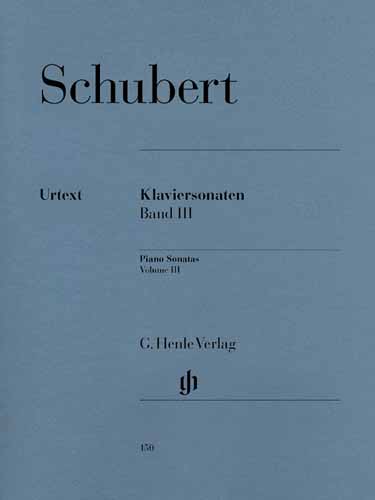 Schubert's 22 piano sonatas sketch a most illuminating picture of the prematurely departed composer and of his compositional path. From the first attempts of the gifted 16- to 19-year- old musician one can trace a continuous development leading to the five great sonatas which he wrote in the years 1823 and 1826, and finally to the three masterworks written shortly before his death, which place him on a level with Beethoven as a composer of sonatas.

The intensity with which Schubert approached the genre of the piano sonata meant that he left a large number of piano sonatas incomplete. Volume III of the three-part Henle Urtext edition contains – next to the early sonatas from the years 1815-1818 – the fragments completed by Paul Badura-Skoda, whose completions are highlighted each time by small cue notes. The Critical Report in the Appendix also provides precise information about the genesis of the individual works.