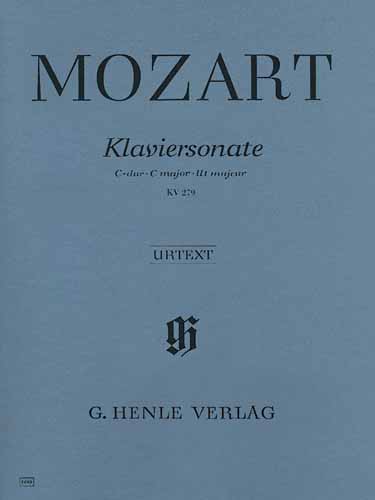 FIRST MOVEMENT Although the six sonatas were apparently written down more or less at the same time, there is reason to believe that at least the opening Allegro of the Sonata K 279 was composed earlier. Unlike all the succeeding sonatas, it lacks a characteristic significant opening theme. Instead it starts with a series of four different motifs, in a way reminiscent of baroque techniques. All three movements are in sonata form. The first movement with its ornate figuration does not yet attain the melodic richness of the following sonatas; the structure is transparent and, after an extended development section, its main surprise is a different order of subjects in the recapitulation.

SECOND MOVEMENT The two following movements, on the other hand, already match the succeeding sonatas. Especially pleasing in the C major Sonata K 279 are the expressive lyrical Andante – (the triplet figuration of which foreshadows the famous Andante in the C major Concerto K 467) and the lively and fresh Haydnesque Finale.

THIRD MOVEMENT The second subject of the brilliant final movement, which opens the development, happens to be rhythmically identical with the finale motif of Haydn’s F major Sonata Hob. XVI/23 and – even more so – with the presto theme of Haydn’s B minor Sonata Hob. XVI/32. This is one of the many reasons to believe that Mozart most probably knew Haydn’s so-called six Kurzböck-Sonaten well.
Paul and Eva Badura-Skoda