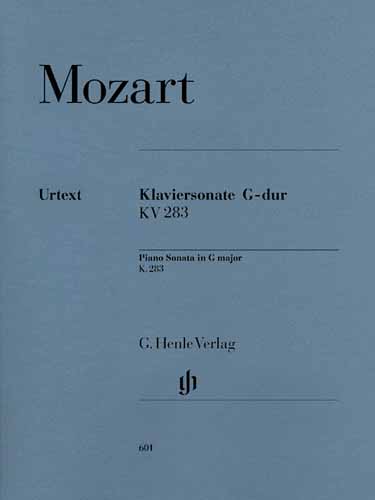 FIRST MOVEMENT The fifth sonata K 283 (189h), in the pastoral and joyous key of G major, is especially popular; it again displays novel ideas, musically and pianistically. The diversity of its melodic invention is highly typical of Mozart, and so is the clear-cut sonata form of the first movement. The very first idea is a marvel of folkmusic-like invention. The opening theme and its continuation is an interplay of question and answer with the final response in baroque hemiola rhythm (a sudden 3/2 meter interpolated in a 3/4 movement). The ornamented unison passage which follows (mm. 16-22) is superbly written and sounds especially brilliant and full-bodied on the pianos of Mozart’s time. This tutti effect was one of his favourites, and he also used it in later works, such as the Variation on a Theme by Gluck K 455 the Piano Concerto K 456/I and the cadenza of the Piano Concerto in G major K 453/I.

SECOND MOVEMENT The Andante in C major is unpretentious, but with the help of subtle shading in performance, the repeated notes of the theme can become really effective. Unlike the first movement, which in place of a new development section simply presents a new idea followed by an extended transition to the recapitulation, the second movement contains a true development in the 19th century textbook sense, presenting the subject first in the right hand (in D minor and C major) and then in the lower register and so no.

THIRD MOVEMENT A scintillating virtuoso Presto concludes this Sonata. At the very end, there is a typical Mozartian joke: he wrote the word Coda into the score; but instead of the expected elaborate epilogue, this tail consists of only two concluding chords.
Paul and Eva Badura-Skoda