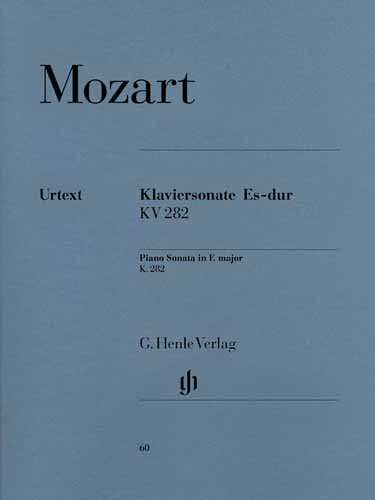 FIRST MOVEMENT Remarkably, this sonata opens with a slow movement like the A major Sonata K 331. But the form is not a Theme and Variation. Instead, the lyrical Adagio is in sonata form. It starts with an expressive theme in three-part writing which, surprisingly, is missing in the recapitulation and recurs only in the coda. The expression is so tender and intimate that this movement might well have been labeled “amoroso” like the Andante from the preceding sonata. What to our ear sounds typically Mozart is in reality an adaption from Haydn’s Theme and Variations in the same key, Hob. XVII/3, composed, but not printed, before 1774. Melody and harmony are practically identical, only the rhythm is different. Is this a case of unconscious borrowing? Maybe Mozart saw a handwritten copy in the possession of Haydn’s brother Michael. A grazioso second theme begins in measure 9. Basically, this is a simple binary motif, which is repeated and merges imperceptibly into the concluding thought of the exposition. The development begins dramatically with a highly charged diminished seventh chord followed by two short crescendos. Inspite of its small dimensions, this movement shows Mozart at his best – expressive, exquisite. He was meticulous in providing it with plenty of articulation signs and dynamic marks.

SECOND MOVEMENT In contrast to this slow movement, the next one is a lively minuet with a relatively long trio section (labeled Menuett II), which clearly draws on Austrian dance traditions. Such folk or popular elements are relatively rare in Mozart, but this Movement is the exception, akin to the minuets of Beethoven’s Septet, op. 20 and his Sonata op. 49 N° 2.

THIRD MOVEMENT The finale, an irresistibly fresh and brilliant Allegro in 2/4 meter, concludes a distinctly original and lovable work.
Paul and Eva Badura-Skoda