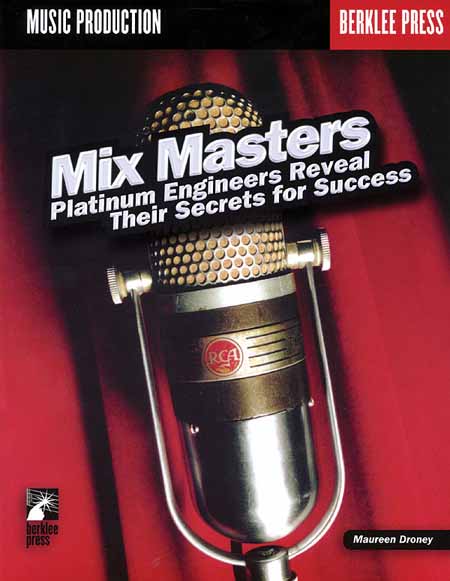 Learn what it takes to be a great mix engineer! Mix Masters is a collection of 27 interviews with platinum engineers by Mix magazine writer Maureen Droney. Discover how music engineers, using the same arsenal of tools, can create such unique works from artist to artist, even track to track. You'll find practical and informative behind-the-scenes, behind-the-glass insight into the art of mixing by the industry's most in-demand engineers across all genres - pop, rock, country, classical and film.

Platinum engineers answer the questions you'd ask them yourself if you had the chance. Use their experience to your advantage. Inside you'll learn:

.How to set up a mix that has power and impact
.Tips for microphone placement for piano, drums and guitar
.How to record and mix multiple vocal tracks
.Tips and tricks on using all types of effects processors
.The best mics to use for any instrument or setting
.EQ techniques

Maureen Droney has worked in the music recording industry for over twenty years. She has been the mix engineer for such artists as Carlos Santana, John Hiatt, Kenny G., George Benson, Aretha Franklin, and Tower of Power. She is the Los Angeles editor for Mix magazine and is a frequent contributor to numerous performing arts publications.

"The day I got Mix Masters I didn't stop reading it until I had to leave for work. Wow! I learned how to mic a guitar amp a little off center to avoid super-high powered frequencies, how to get my synth basslines to hit harder, and how Herbie Hancock's engineer mixes at 84dB...you'll learn a lot."

"Mix Masters is a good book in that people who work in a variety of music talk about their different approaches and how they got into the recording bag, and Maureen's interviews are converstaional and knowledgeable, as she's an accomplished engineer herself."

"The best thing about Mix Masters is its abundant advice on practical matters such as mixing, mic placement, effects, and EQ. Thanks to Droney's personal experience as a recording engineer, her interviews provide plenty of depth and insight."

"Droney gets cozy with some of the music industry's top engineers and sheds some light on a number of landmark recordings, [leaving] few stones unturned."

"Offers a very candid and behind the scenes look into the world of the unsung hero of the recording studio. Author Droney asks all the right and pertinent questions. Mix Masters is an all-around great read for anyone interested in the magic that can happen during a recording session."

"This book covers it all: equipment, techniques, philosophy, and psychology. It not only takes you into the studio but also into the minds of the great people behind the music. An excellent resource for everyone from students to seasoned pros, and also a fun read. Once I started it, I couldn't put it down."

"Mix Masters is an insightful, brilliant look into the true masters of the craft, via hard-hitting, tough interviews by someone who's been there and done it. This book is as good as it gets."

"Even with all my experience in the music industry, I still learned a lot from this book. The author's real-world perspective provides in-depth insight into the recording process. An invaluable road map to success."

"Mix Masters is a backstage pass to the creative process behind the world's most influential recordings. The diversity of the producers interviewed make this book accessible to anyone who is a fan of music."