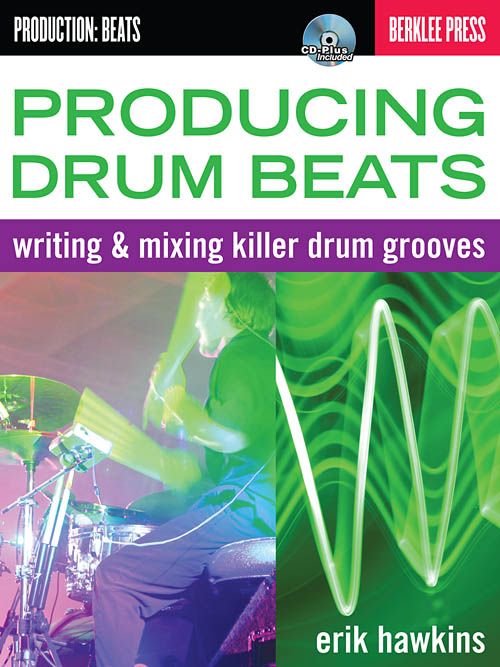 Produce killer drum beats for any style of music. This comprehensive handbook will show you the secrets used by top producers for creating larger-than-life drum tracks. Understand the different components of a drumbeat, and learn to write and mix incredible grooves while using today's wealth of amazing music production tools—from loops and MIDI to drum replacement and DAW software programs. The included CD-Plus includes demonstration tracks, and free MIDI and audio samples from Big Fish Audio, KEYFAX, Multiloops, and Smart Loops.

You will learn to:

.Understand the different components of a contemporary drumbeat, including drums, cymbals, percussion, plus electronic samples and loops
.Create drum beats using different types of MIDI controllers and techniques, including real-time and programmed beats
.Use techniques in popular audio and MIDI sequencing software such as Pro Tools, Logic, and Reason
.Think like a drummer, making your beats work well with the rest of the groove and song form, and using drum fills effectively.
.Mix your beat using time tested EQ, compression, and parallel effects techniques

Erik Hawkins has written and produced beats for songs on ABC, CBS, FOX, MTV, Nickelodeon, and New Line Cinema, on films and TV shows such as Ugly Betty, CSI:Miami, Burn Notice, Lie to Me, Big Brother, The Last Day of Summer, and The Informers. He has worked with and remixed artists such as Irene Cara, Digital Underground, Conscious Daughters, Brenda Russell, and Stryper. He is the author of The Complete Guide to Remixing and Remix (Berklee Press), and numerous articles for publications including Remix, Mix, Electronic Musician, MC2, Keyboard, and DigiZine. His album, Erik Hawk & The 12-Bit Justice League (MuziCali), is packed full of killer beats (available through iTunes and CD Baby).

"A well produced groove or drum beat is one of the most important parts of today's music, and you need a killer groove for your tracks to compete with other songs on the market. The information in this much-needed book will benefit songwriters and producers alike who want to take their beats—and their entire tracks—to the next level."

"Producing Drum Beats is a brilliantly presented step-by-step guide to sequencing and recording drums in a way that not only makes sense but is fun to follow. I wish there had been a book like this when I started sequencing (in 1988!). It would have saved me a few months of "figuring it out" time. Erik Hawkins joins the dots in an instructional, inspirational, and musical way."

"This book will help you make better beats, whether you're just starting out or have been making beats for years. Drummers and non-drummers alike can learn a ton about producing beats, here. Always with the song's best interest in mind, Hawkins expertly explains the techniques that the pros use (like time stretching and groove manipulation in any DAW) to create bangin' beats and killer drum tracks in any genre of music."